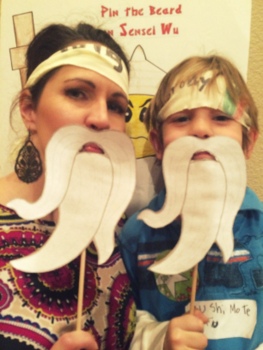 For Brody’s 6th birthday he wanted a LEGO Ninjago Birthday Party. Now with a January birthday in Texas, we never know what kind of weather we’ll have. One year he had a “PJs and Polar Bear” party and, of course, it was 80 degrees that day! But on the day of his LEGO Ninjago Birthday Party, it was cold with a light drizzle, so ALL the noise and chaos stayed of 15 kindergarteners stayed INDOORS. Oh the joy!

Watch a recap of all the fun, then read below for specifics on games and food if you choose to host a LEGO Ninjago Birthday Party!

When the kids arrive, they received Ninja Warrior headbands and determined their official Ninja Names.  I downloaded the FREE font “Japonesa” from DaFont and printed out each kid’s name, then traced their names onto the headband using a Sharpie.  I used a somewhat stretchy polyester knit material, so it was a bit tedious.

I googled “find your ninja name” and had this printable available for each kid to create a name tag with their official ninja name. Brody was to be called ZuShi MoTeFu.

Then our middle middle son, Austin, taught the young ninja trainees how to make ninja stars. 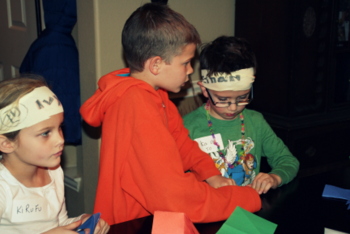 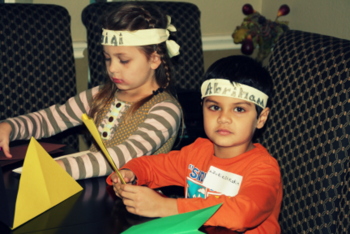 Next, we had a little game of “Pin the Beard on Sensei Wu.”  I just downloaded a coloring page and did a little freehand drawing on foam poster board. I used a printable of Sensei Wu’s beard from Craft Interrupted and glued it on thin card board and cut it out.  I also taped a couple to small dowel rods to beards (you could use chopsticks) and had Brody take a pic with each guest before they left.  We’ll include the photo in the thank you notes.  Hopefully, I can find a deal for FREE prints sometime this week! 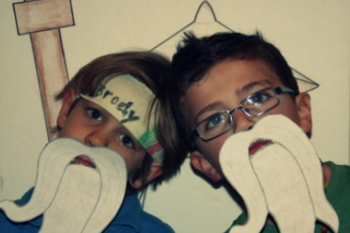 Oh, and I must mention the LEGO Ninjago Birthday Party Favors were the little packages of LEGOS that are normally $3.99, that I got for only $.39 each!!!  They were a hidden 90% off Target clearance after Halloween item a few years ago patiently waiting in my closet for a day just like this! 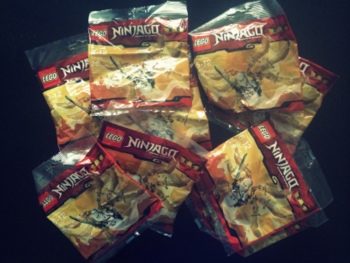 Another “filler” activity, was to guess how many Lego were in the jar.  The winner, got to pick a prize from the “Prize Basket.” 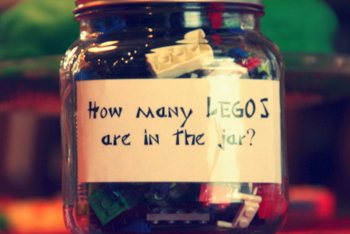 This was my first attempt at using fondant and though it was a little labor intensive and my cake was incredibly crumbly and hard to work with, I enjoyed the creative outlet.  I used this recipe for Marshmallow Fondant, which is super-easy! 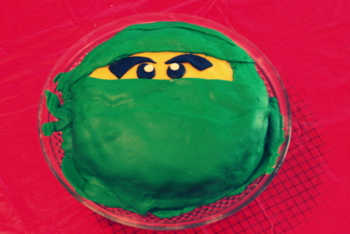 I also made Rice Krispie Sushi 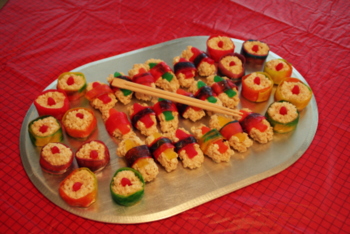 A “Great Devourer” veggie tray which no kids touched…shocker, right?!? 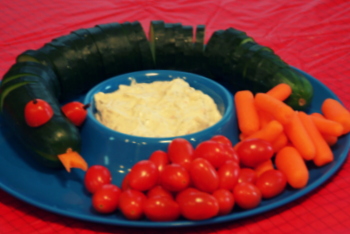 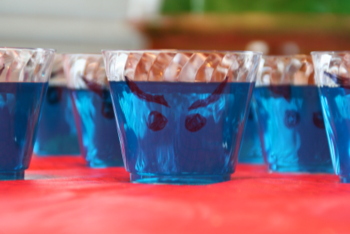 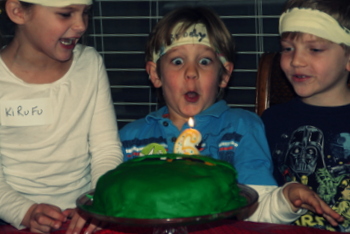 There’s a growing trend to not open gifts at parties. I don’t understand it. I love how excited each kids gets watching their gift be opened by the birthday kid, plus getting to see all the other gifts that are given is a fun experience for everyone.  Just call me, old school!

But after over a decade of hosting kids’ birthday parties for my boys, I’ve learned the best way to avoid utter chaos.

Here’s are the steps:

This process always works great and keeps a swarm of kids from surrounding the birthday boy where no one can see what’s going on. 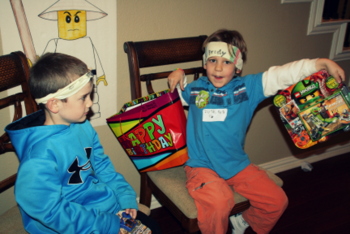 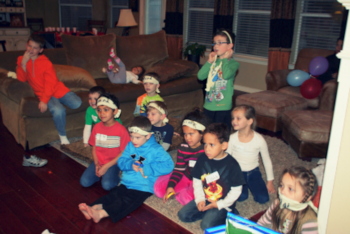 And then all that sugar kicked in.  I purchased a Streaming Media Player, so we could watch the official trailer for the new season of Ninjago and we watched the theme song music video.  It’s pretty catchy!  I also streamed some Ninjago episodes on Netflix.

This got the kids up and moving and ready to channel their inner ninja character! 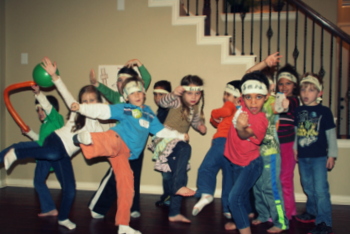 I hope these idea help you to plan your kid’s LEGO Ninjago Birthday Party! Have fun!!!

Looking for a cheap lunch or dinner date! Kids eat